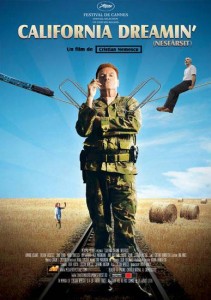 On the heels of “The Death of Mr. Lazarescu”, “4 Months, 3 Weeks and 2 Days”, and what is commonly being referred to as the Romanian New Wave comes “California Dreamin’”, a relatively lighthearted tale. The darker and sadder story here is that Cristian Nemescu, the film’s director, died in a car accident shortly after finishing this, his only feature film. At the very least, it can be said that the director had a sure hand and a promising career ahead of him.

In A. O. Scott’s feature article in last January’s New York Times Magazine, the reviewer formally introduced the rising Romanian film movement to mainstream America. But to compare it to, say, the French New Wave might be a bit premature, but clearly, as Scott illustrated, something has taken hold in that part of the world. While Lazarescu and “4 Months”, directed by Cristi Puiu and Cristian Mungiu respectively, were reminiscent of cinema vérité, with long continuous passages shot in what seems like real time (think Andrei Tarkovsky or, more recently, Bela Tarr), “California Dreamin’”, by contrast, seems positively upbeat as its title suggests. Nemescu’s technique is traditional linear storytelling.

The story opens in flashbacks, during an incidental bombing by the Allied Forces in World War II. A family is sitting at the dining room table eating their meal when air raid sirens go off. They grab their packed suitcases and make a dash for the shelter. While running down the stairs, there’s a thunderous crash, and moments later they are being chased down the stairs by an unexploded missile. As the bomb lays unexploded, we see stamped underneath a plate, Made in America. Seemingly, the point of the flashback is to show how America has a long and sloppy history of leaving its mark on parts of Europe, taking them for granted and using their resources when convenient only to abandon them in their times of need.

However, the crux of the story takes place in 1999 during the final days of the Kosovo conflict. A U.S. Marine troop is taking a train across Romania to follow through on a NATO mission to install radar equipment, and leading the company is Captain Doug Jones (Armand Assante). The train stops in Capalnita, a small backwater in the center of the country or, as Jones describes it in his increasing frustration, a town lost in the crease of the map. Even though the mission has the official approval of the Romania government, Captain Jones and his men are up against a stubborn entity—the will of the powerful stationmaster, Doiaru (Razvan Vasilescu), who demands the proper customs documents before he’ll let the train continue.

Stuck for several days, the foreigners are treated as a curiosity by the local residents. Led by the mayor, the locals decide to celebrate their town’s 100th anniversary—an event that already took place a month earlier—by throwing a lavish banquet in the town square with an Elvis impersonator as the star attraction. Seething with frustration, Jones plays along and uses every opportunity to try and inure himself to Doiaru, but to no avail.

In the meantime, the soldiers have caught the attention of the town’s young women, much to the chagrin of their boyfriends. One relationship with momentum, in particular, is that of Sergeant David McLaren (Jamie Elman) and Monica (Maria Dinulescu), the daughter of the strict station master. With the help of one of Monica’s schoolmates, Andrei (Alex Margineau), who acts as translator in spite of his own feelings for her, they go to a party. There, David and Monica have a heated encounter which, in one of the film’s more peculiar moments, sets off a power outage throughout the entire region. (The symbolism of which was lost on this reviewer.)

At times I was reminded of a Michael Winterbottom or Ken Loach movie. There’s something of a political agenda here, but unlike those two Brits, Nemescu’s vision is a vaguer one, more ambiguous perhaps. The flashbacks felt superfluous, and at times I wasn’t sure if I was watching a film with a political message or a human comedy. In the end, it was a bit of both. Not a perfect film but one whose offbeat choices makes it all the more captivating. The casting of Assante is one good example. Playing a stereotypical military man down to the cigar and buzz cut, his Captain Jones is the most American performance the actor has ever given in his long career. There is not the slightest hint of ethnicity in his performance. Assante has always walked the thin line between A and B movies. Clearly, “California Dreamin’” is much more than a Romanian B movie.