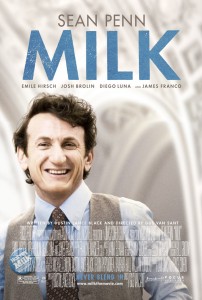 On the heels of Prop 8, comes Gus Van Sant’s “Milk” and without mincing words, it’s a tour de force. The truth is, as big as this movie’s subject matter is – the assassination of San Francisco’s first out gay politician, Harvey Milk (Sean Penn) – and as much opportunity as there is to pound in its message, the reason the movie works so well is because it is thoughtful in its telling and its performances are so subdued. A movie along these lines is, frankly, ripe for melodrama but Van Zant goes deeper and puts character before agenda. Early in the movie, Milk literally stands on a soapbox but never for a moment do we get any of the Oliver Stone bombast. Milk intentionally uses his personable nature and humor to reach or rather, create his constituency. It is no doubt something of a defense mechanism. Harvey Milk led a closeted life until he was about 40 years old, which happens to be just when the movie starts. A moment later we see that Milk has been killed and the movie is told in flashbacks as Harvey sits at his kitchen table and commits his story into a tape recorder. His calm narration gives the movie its stabilizing tone.

We meet Harvey Milk in New York City in the early 70’s on his fortieth birthday. He’s approaching middle age and, as he relates to the young man he picks up on a subway station steps, he wants to do something meaningful with the rest of his life. Coming out is a shock so Milk moves with his new lover, Scott (James Franco) to The Castro, an old Irish Catholic neighborhood in San Francisco. There they open a camera shop, the neighborhood’s first openly gay-owned business. Though shunned at first, Milk quickly builds a gay community there, where they are eventually able to sway business owners through the power of the queer dollar. A natural community organizer and likable soul who appealed to gays and non-gays alike, it was a fait accompli that Milk would run for office and through his charm, he drew a coterie of highly intelligent and dedicated supporters. Using the camera store as his political base, Milk loses his first couple of campaigns but after some redistricting, is elected to the San Francisco Board of Supervisors.

To his great credit, co-star Josh Brolin seamlessly holds his own against Penn’s sublime performance as Dan White, a former colleague of Milk’s but one with outdated values, echoed by the televised images of Anita Bryant throughout the latter part of the film. He is always frustratingly out of step and is conflicted in more ways that meet the eye. Sadly, the outcome of his inner-turmoil ultimately lead to his assassination of Milk and Mayor George Moscone (Victor Garber), who unlike White, shrewdly aligns himself with his newly expanding demographic. The penultimate scenes of their confrontations are the hardest to watch.

As for Sean Penn, who is now also middle aged, “Milk” firmly plants him where he deserves to be: as America’s finest character actor. Some may clamor about the Philip Seymour Hoffmans and the Jeffrey Wrights of the world, and they would be right, but few actors have the range of Sean Penn. With a great director, and Van Zant is certainly in that pantheon, Penn wins the gold in this writer’s opinion. His Milk is economically acted; nowhere is there a shred of fat.

Rounding out the cast and generally well used are Emile Hirsch as a hustler turned compatriot and Diego Luna as a fragile-hearted lover. A number of fresh faces populate the campaign circle and will no doubt be appearing in many movies to come.

Though its soundtrack and art direction may make one nostalgic for the political charged days of the 70’s, there is little else that makes this film’s story an historical one. Leaving the theater, it was impossible not to consider how gays and lesbians are still fighting for their human rights and also, perhaps even more frighteningly, that fear and hatred still make assassination a very valid concern. “Milk” has a screenplay by Dustin Lance Black and was photographed by Harris Savides who also shot Van Sant’s “Elephant” (2003) and “Last Days” (2005). Danny Elfman provided the score and Bill Groom its production design.