film review: TAXI TO THE DARK SIDE 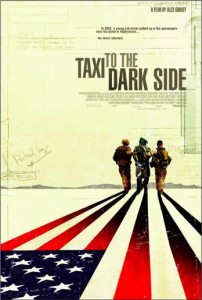 Just how botched the current administration’s tactics have been in its war on terrorism is made abundantly clear in Alex Gibney’s absorbing new film. This documentary is one of many detailing the quagmire that we have found ourselves in both legal and moral terms, not only in Iraq but also in Afghanistan. What’s new is that “Taxi to the Dark Side” gives due attention to an otherwise overlooked victim, a young Afghan taxi driver who is taken in for questioning and dies a few days later at the hands of his captors. 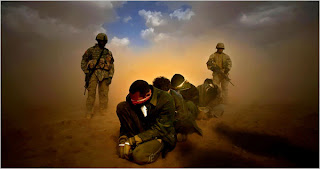 In his prior documentary, “Enron: The Smartest Guys in the Room”, Gibney lucidly walked his audience through a complex web of business and legal issues to get to the greedy core of what inevitably brought down the titular power company. Here, Gibney is no less successful with a subject that is much darker and disturbing. Besides the story of the taxi driver, Dilawar, his mistaken capture, torture, and subsequent death in the hands of U.S. military intelligence, Taxi also broadens the more sinister story of a government willing to do anything to cover up its mistakes. The irony is that the same incompetent culprits that caused Dilawar’s death were also incapable of hiding their crime. And while Dilawar’s story sometimes feels lost in the scheme of things, the film’s interviews with his family members are heartbreaking and effective.

At this point in the war, everyone seems only too willing to talk in front of the camera, and Gibney has lined up quite a coterie. Among the outraged are New York Times journalists Carlotta Gall and Tim Golden, various academics, and lawyers. More significantly, the film includes former interrogators, victims, and armed services retirees, like U.S. Army Colonel Lawrence Wilkerson who also appeared in Charles Ferguson’s recent “No End in Sight” (also produced by Gibney).

The level of liability is sometimes hard to measure, but what everyone seems to agree on is that the Bush-Cheney administration is egregiously to blame for the misguided, under-financed excuse for an intelligence operation and the criminal behavior that has taken place in the detainment and interrogation of suspected terrorists. Footage of Donald Rumsfeld referring to those American soldiers who perpetuated the violence at Abu Ghraib as a “few bad apples” actually garnered chuckles in the screening I attended. It’s clear we’ve long since graduated from cynicism. All we can do is squirm through documentaries like “Taxi to the Dark Side” and wonder where to channel our anger.