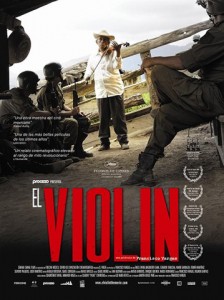 The theme of music as a means of connection is hardly an uncommon one in movies these days (“Once”, “High Fidelity”, “Hustle & Flow”, etc.). It’s been used on so many occasions whether in documentary or narrative film, that it’s impossible to account for them all. In Francisco Vargas’ El Violin, shot in a grainy black & white with the appropriate feel of the indie film it is, the story is about the instrument more so than the music it makes.

Taking place within an occupied military zone in impoverished Mexico, the movie opens with a particularly brutal sequence involving the torture of captured rebels. We are then introduced to the venerable Don Plutarco (Don Ángel Tavira) who walks the local towns playing the titular violin with his guitarist son Genaro (Gerardo Taracena) and grandson Lucio (Mario Garibaldi) playing for pesos. There’s more than meets the eye as we soon learn when Genaro goes into a local cantina where he has furtive plans to pick up guns and ammunition. How that contraband makes its way to the fellow rebels hiding in the mountains is the gist of the story and how the film gets its name. With his quiet frail demeanor, he is able to travel in and out of the military zone armed with his violin case and information he overhears. In one of the many authentic aspects of the film, he is able to connect with Comandante Cayetano (Silverio Palacios), a sadistic soldier who is enthusiastically loyal to his cause. Through Don Plutarco’s music the soldier, like a soothed beast, becomes a human being if just for a few moments. All of the characters are fully realized and avoid the stereotypes found in so many ideologically driven films. In “El Violin”, it’s clear its director is more interested in finding the humanity in his characters.

Originally an award-winning short, “El Violin”‘s undeniable coup is in the casting of non-professional actor Tavira who is the heart and soul of the film. The award he won in Un Certain Regard at Cannes will no doubt get him some very due attention. The movie is playing at Cinema Village in Manhattan (22 E. 12th St.) and will be available on DVD in February at Film Movement.