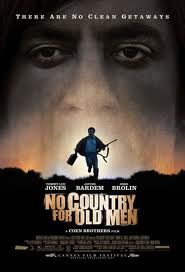 The body count in the new Coen Brothers movie, “No Country for Old Men”, could very well be higher than the collective death toll from all their past movies. Fans of these Minnesota-bred filmmakers will remember their darker excursions into violent terrain, like “Blood Simple”, “Miller’s Crossing”, and swaths of “Fargo” (“I guess that was your accomplice in the wood chipper”). Not to say there aren’t familiar moments of their humor throughout “No Country”.

One of these memorable scenes comes well past the halfway mark when Llewelyn Moss (Josh Brolin), who earlier found over two million dollars from a drug deal gone terribly wrong and is now being hunted by the psychopathic killer Anton Chigurh (Javier Bardem), walks into a small town five-and-dime wearing just his hospital gown and cowboy boots. The nonplussed shop clerk looks up and without so much as blinking an eye asks Moss how the pair of boots he sold him earlier was working out for him. The moment is that unique brand of Coen Brothers humor at once familiar and so very welcome in a movie that needs its tension broken whenever possible.

Other than these touches (hit man Chigurh’s bizarre-looking page boy haircut) and a few deleted scenes, the film is remarkably loyal to its original source, Cormac McCarthy’s 2005 novel of the same name. Spare with bursts of shocking violence, the men in both tellings are strong and mostly silent, and when they do speak, it is with a world-weariness and pessimism you might find in a Graham Greene novel. This is true for Moss as it is for Sheriff Bell (Tommy Lee Jones), who is trying to find Moss before Chigurh does. The violence is inevitable, and the most terrifying moments are seeing Chigurh’s victims not having the option to hide behind the comfort of denial. Most of them are just too smart; they know what’s coming.

Set along the U.S./Mexican border in 1980, drug trafficking is as common as the violence associated with it. Moss has to hit the road once Chigurh finds out he stole the money, but not before he sends his wife Carla Jean (British actress Kelly Macdonald convincing as a 19-year-old Texan) out of town and out of danger. Thus starts the cat and mouse game with Chigurh that plays out for the crux of the film. Woody Harrelson shows up as a fixer type, hired by the white-collar criminals who are running the drug trade.

Tess Harper as Sheriff Bell’s patient wife and Barrie Corbin as his wheelchair-bound uncle suggest a darker back story for Bell, a World War II vet. Men like Bell had a hard enough time rationalizing the violence of war and how one can justify killing others. Once the codes are taken out of the realm of war and into one’s own unassuming existence, the grimmer reality of what a man is truly capable of is only too clear.