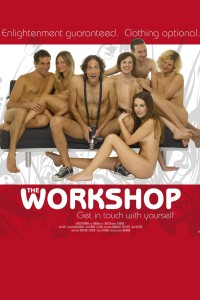 Meet Paul Lowe. British, silver haired and charismatic, he’s the founder and spiritual guru of the Workshop. There’s Ryan, yoga instructor to the stars, who seems to be the serial Workshop stud. Besides appearing in the buff for most of the film, he spends a great deal of time navigating between love interests. Later we learn he also happens to be Paul Lowe’s son-in-law. Then there’s the lovely Laurel and just as lovely Maddy. Both seem to be in love with Ryan and trying to come to terms with their feelings of jealousy and inadequacy. They’re naked too. Here comes Brian, a reserved British bloke who, while usually clothed, is in love with Laurel. Or was that Maddy he was in love with? Oh, who can remember?

These are just a few of the primary players in “The Workshop”, a provocative new documentary by British photographer Jamie Morgan, which recently premiered at the Tribeca Film Festival. His camera follows a group of Brits and Americans –and one memorable German– through the week long self-help retreat in Northern California. The individuals are there to find inner peace and shed the layers of falseness that one grows over time when trying to accommodate the expectations of a society built on conformity. Lowe rejects monogamy, for instance, referring to it as a social construct, a form of brain washing. By living authentically, the things you want in life will just come.

Shot with a hand held video camera, with no special lighting or sound, Morgan provides us with more than just a fly-on-the-wall perspective; he participates in the workshop himself but not without some initial grappling. He then wisely focuses on a small part of the group’s population, including its dynamic leader, which provides the film with a couple of interesting story lines. 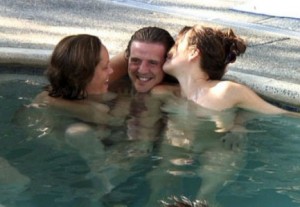 To actually participate in the process of ‘the Workshop’ is to make yourself vulnerable and naked, quite literally at times… well, most of the time. I wondered as I watched the film –along with my friend “McC” who had gone through ‘the Workshop’ some ten years earlier– was Morgan’s tightrope act, his ambivalence, just his way of keeping up the appearances of neutrality or was something else at play? And herein lies the paradox. For his documentary to succeed, the film must come across as honestly as the goals the workshop is trying to achieve. In fact, it was because the bar was raised so high that I was wondering if I hadn’t been manipulated. With the all the free sex among the participants, some of whom were in committed relationships with partners back home, one speculates about what their motives for participating were. Were some of these participants there simply to get laid? If so, is that so wrong? Morgan himself gives mixed messages. At one point he decides to participate in a group orgy, we see him lying amidst a tangle of naked limbs, boobs and genitalia. [While provocative and sometimes outrageous, the film to its credit is seldom titillating.] A little while later he’s crying tears of guilt into a cell phone. The irony is that all the characters, including Morgan, are left feeling as alienated, guilty and jealous as they were before taking part. And after the ubiquitous “one year later” message appears towards the end, we learn that most have gone back to their workaday lives living in monogamous relationships.

Having said all that, I really enjoyed “The Workshop”. It left me feeling inspired to live my life more authentically. I came away realizing that the point isn’t necessarily to walk away from something that isn’t working for you, whether it be a job or a marriage, but to identify what is not working for you and to take the necessary measures.